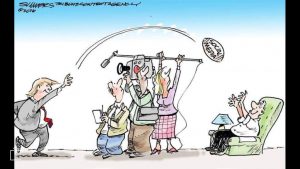 When I started my blog, I worried that there wouldn’t be enough interesting topics to write about on a regular basis. I was wrong…

Politically, 2016 was the year of Brexit and Donald “Mr. Brexit” Trump.

If you read one single article by me, let it be How to win votes.

Written shortly after the Brexit referendum, it anticipated what the mainstream media ‘discovered’ following the election of Trump. Including fake news, the role of hackers, online bubbles, demographic voting blocks, elite rejection of election results…

Rereading my piece What voters like about Trump, I can say that I covered all relevant aspects months before Trump’s victory forced the Belgian press to take him seriously. And I pointed out the backlash against social justice warriors which is also happening in Europe, e.g. due to their crusade against Zwarte Piet (note that my post was written in June!).

By clicking on the Trump tag, you can find more posts on Trump’s presidential campaign and the reaction of the press.

On finance and economics, I have written long posts on central banking, such as

Furthermore, some economic posts exposed the errors of tenured professors. They should read my upcoming book!

The book I’m writing is a kind of Finance for dummies1. I need about one more month of editing before I can send it to a publisher. Check my blog in 2017 for updates on when it will be released. You can also follow me on Twitter.

There is nothing about Trump in my book, so his haters will also like it!

As the end of 2016 is quickly approaching, it is time to reflect on the past year. For people working in large bureaucratic organizations like banks and government, this means filling out performance evaluations. Organizations collect these records of their employees’ professional histories. Managers can use old reviews to motivate (non) promotions of their subordinates.

One intriguing aspect is the fact that employees are expected to write negative things about themselves. In management speak this is called “opportunities for growth” or some other bullshit term. But basically the writers have to incriminate themselves. The self-evaluation provides the proverbial rope for somebody to hang them with.

This reminded me about something I read in a book1 by historian Orlando Figes on the Soviet Union. Members of the Communist Party had to write an autobiography which was regularly updated. The higher-ups in the hierarchy could use these documents to control their underlings and their rivals.

The more you think about it, the more parallels there are between modern business life and Soviet society.

It is well known that corporations are not democracies nor markets. But this post focusses on the cultural similarities that caught my attention. END_OF_DOCUMENT_TOKEN_TO_BE_REPLACED