The rise of Trump should interest everybody in “the West” for two reasons. First of all, many problems faced by the United States are similar to those in Europe. Secondly because of the immense economic, political and above all cultural influence America has on the world.

The media portray Donald Trump as a sexist, a racist and an ignorant warmonger.

Is this picture correct? Why are so many voters attracted to him? This post lists the items put on the political agenda by the Trump campaign.

Enforcing immigration law. This means that illegal immigrants – who by definition broke the law – should be deported  from the USA1. A wall at the border with Mexico should prevent future illegal immigration. Trump links illegal Mexicans to crime. His adversaries reinforce this point by burning the American flag and waving Mexican flags while harassing his supporters at one of his rallies.

A temporary shutdown of Muslims entering the US.

Protecting the Second Amendment of the Constitution, a typical American topic. This amendment grants US citizens the right to bear weapons.

Taking care of veterans rather than illegal aliens.

Countries like China love selling their output on the American market, but are protectionist when it comes to importing goods. Factories were shipped from the US to China and Mexico. This enriches owners and top management. American workers become unemployed or underemployed if there are no good jobs to replace the jobs they had. Trump wants to reduce the trade deficit of the US.

America’s allies should pay a larger share of their defense costs.

Trump is AGAINST the military interventionism of the United States.

This is a major change in the doctrine of Republican Party (GOP), where the neoconservatives instigated the wars of George W. Bush. But this foreign policy is not limited to the GOP. Democratic President Barack Obama and his Secretary of State Hillary Clinton took the same interventionist stance in Libya, resulting in a Libyan branch of ISIS. This also shows how uninformed or dishonest many of the critics of Trump are.

But as cartoonist/ad-hoc political analyst Scott Adams says: identity is the strongest factor in persuading voters.

Many feel that their identity is under attack, and they see Donald Trump as a champion who will fight and win for them. So rather than the specific domestic and foreign policy proposals above, we mainly need to look at the cultural aspects of Trump’s campaign. Why have people set their hopes on Trump to protect who they are?

It is not surprising that people agree with this sentiment, seen the overwhelmingly liberal political bias of the media.

The Republican Party (GOP) brands itself as conservative. However, it always gradually yields to new progressive demands like gay marriage and transgender laws. The ineffectiveness of the GOP establishment2 is mocked by this parody tweet, showing the frustration of the conservative base: 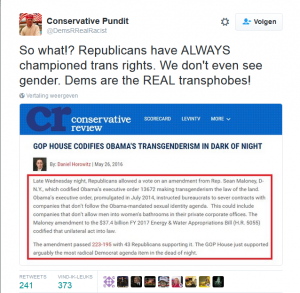 Some of Trumps supporters expect that Trump will defend their way of life and their values much more aggressively.

Although Trump might be (deliberately?) vague about the meaning of political correctness, it is clear what his supporters think about it when you read comments online. Here are some examples of what they are sick and tired of:

The purging of American history in favor of non-whites. This takes many forms, such as the removal of Dixie flags and the replacement of Andrew Jackson from the front of the $20 bill by a historically insignificant black woman.

The demographic decline of Americans with European ancestors relative to those descending from Third World countries. For conservative author Ann Coulter, this is the defining issue:

Note how Coulter contrasts the importance of immigration with the Republican priorities of the past. The old conservatives stressed religiously symbolic topics like abortion.

When Trump speaks about “the false song of globalism” and that “the nation state remains the true foundation for happiness and harmony”, this is music to the ears of the Alt Right. This Alt(ernative) Right is a movement of nationalists. Instead of framing ‘right’ in religious and economic (pro small government and free market) terms as the GOP did in the past, the Alt Right rejects the globalist free market and open borders as anti-white dogmas. They like Trump’s message of America First.

It should not have been necessary for me to write this post, if only the regular media did their jobs. Anybody with an internet connection and some time at their hands could have written what I did here. Instead, reporters and analysts look at Trump with amazement. For example, in Belgian newspaper De Tijd, historian Anne Applebaum is puzzled by the fact that Trump is divorced twice and still won the GOP nomination. This further proves the cluelessness of the press and the intellectual isolation of so-called experts.

Especially for European journalists, the reasons behind Trump’s appeal to voters should be obvious. Western European countries also have mass immigration. For the native population, this brings crime, cultural alienation and competition for (low skilled) jobs and social benefits. Ancient folk traditions like Sinterklaas and Zwarte Piet are suddenly suspect because some SJWs consider the black faced Piet to be “racist”.

Probably the closest comparison the phenomenon of Donald Trump in Europe was Dutch politician Pim Fortuyn. Fortuyn was a populist outsider who knew how to handle the media. As a homosexual, Fortuyn also didn’t fit the traditional image of a conservative. Most importantly, Fortuyn was murdered by an animal rights terrorist. The media may want to consider this when reviewing the way they report about Donald Trump.

For further reading about Donald Trump and his support among intellectuals, I highly recommend this article. To learn more about how Trump runs his campaign, including how he selected his populist topics, read this. He literally listened to the population, which is apparently a strange concept to career politicians. From that last article:

“I listened to thousands of hours of talk radio, and [Donald Trump] was getting reports from me,” Nunberg recalled. What those reports said was that the GOP base was frothing over a handful of issues including immigration […] While Jeb Bush talked about crossing the border as an “act of love,” Trump was thinking about how high to build his wall.