There is a lot of talk about helicopter money on economics blogs and in newspapers lately. As usual, accounting and drawing pictures to explain their ideas are not economists’ strong suit. The predictable result are heated discussions, but not much enlightenment1. This post gives an introduction into what helicopter money is and how it affects the balance sheets and income of economic agents. In a future post, I will explain what helicopter money is supposed to achieve and under which conditions it can be an appropriate macroeconomic policy.

The idea of helicopter money is exactly as the name suggests: money is thrown from helicopters, free for all to take. Formulated a bit less poetically, somebody gives all citizens of a country a certain sum of money. This immediately raises two questions: who throws the money, and where does the money come from?

The government can either borrow or own the money it gives away. Let’s have a closer look at these possibilities.

1. The money is borrowed

When the government borrows money and gives it away, the result will be that citizens are richer3 and the government has a debt. It does not matter who lends the money to the government, as illustrated in the three following cases. In case you are not familiar with accounting and how banks create money, please read my previous post first. Quick reminder: T-figures represent balance sheets. Assets (what somebody owns) are on the left; liabilities (what is owed to others) are on the right.

a) The money is borrowed from a bank

b) The money is borrowed from the central bank

Just for completeness, it should be noted that the end result of this scenario is equivalent to scenario 1a, where the bank is the central bank. When the citizen deposits his $100 bill at the central bank6, the central bank has the cash back as an asset and has created a deposit for the citizen. The central bank now can destroy the physical cash, and at the same time delete the “reminder” in its liabilities that it had printed $100:

c) The money is borrowed from citizens

This scenario speaks for itself. The citizen lends $1007 to the state and gets a bond in return. Then the state makes a gift of $100 to the citizen:

2. The money is not borrowed

a) The money is printed by the central bank

Note that there is no increase in government debt in this scenario, the money is literally printed out of thin air. The central bank does not acquire a claim on another entity (in contrast to scenario 1b, where it swapped its cash for a bond) with the money it printed, nor does it pay for an asset such as gold. Under a gold standard, central banks were only allowed to issue paper money proportional to the amount of gold it owned. People could swap their bank notes for gold. Fiat money systems do not work like that. You cannot ask anything from the central bank in return for your bank notes. The only thing backing the value of the money is the fact that other people accept to be paid with it (for goods, services or taxes).

Mind you that there is nothing special about physical money. In a cashless society, digital money “printing” is just as easy. All that is required is that the central bank increases its assets. For example, it might revalue its banking license. This is comparable to how regular companies use goodwill as an intangible asset. Or the central bank might make platinum coins and give them an arbitrary value8. The central bank pays the government its $100 dividend through a regular bank. In return, the regular bank gets a $100 deposit at the central bank.

That does not mean that the money printed by the central bank needs to exist in eternity. In principle, the central bank could write down its goodwill. This results in a negative equity value. The government could then recapitalize its central bank with taxes, thus reducing the amount of money held by its citizens:

Another possibility is that the government defaults on the currency itself, and starts a new one. The most famous example of this is the abandonment of the Papiermark by the German Reichsbank after the hyperinflation of the early 1920’s.

b) The money was saved previously

In an ideal situation, the state acts as a countercyclical agent in the economy. It does helicopter drops in an cyclical downturn, using money it has saved while the economy was doing great:

This could be done without borrowing money or having the central bank print it. Given how politics works in real life, this is a highly unlikely scenario.

A related scenario would be if the government sells assets as a form of ‘dissaving’. The result is that the government is poorer (although not in debt), and the citizens are richer.

c) The money is taxed from citizens

Taxing and spending is trivial:

Neither the government nor the private sector (on an aggregated basis) is any richer or poorer by tax and spend. Of course, even if helicopter money were raised with taxes, the money would not end up in the same pockets it was taken from. In this post, all citizens (and companies) have been lumped into one ‘Citizen’. The distributional aspects of helicopter money will be discussed in a future post.

The scenarios sketched above can be summarized in the following table, describing how the helicopter money shifts the nominal financial wealth (increase +; stays equal =; decrease -) of both sectors (the state/government and the private sector/citizens): 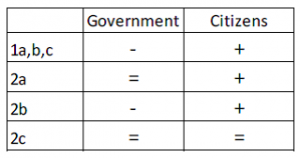 When economists talk about helicopter money, they all seem to imply scenario 2a. The government gives money to the people. The money has not been borrowed, but has been created by central bank printing.

This has been a quite pedantic post, because I wanted to be very explicit about my assumptions and be transparent about all balance sheets. I am glad you made it to the end 🙂 If you spot any errors or have questions about this post, please let me know in the comments!

There is a chapter on helicopter money in my book Bankers are people, too: How finance works

1 thought on “Helicopter money part I: where does it come from?”