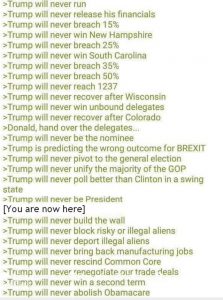 Not having learned from their embarrassing experience, the pundits cannot help but continue their failed predictions. END_OF_DOCUMENT_TOKEN_TO_BE_REPLACED

In spite of their titles and influence, they were dead wrong about Trump. END_OF_DOCUMENT_TOKEN_TO_BE_REPLACED

Elites cannot act against their own interests, right?

Donald Trump has been running a populist campaign against the establishment. To many of his critics, this is absurd.

Why should a billionaire care for the working class? How can a man whose shirts and ties are made in China be against trade deals? Is Trump credible when he calls for a wall at the US-Mexican border, knowing he hired Mexican workers himself?

Trump is so much part of the elite that his Democratic rival Hillary Clinton even attended his wedding to Melania.

It appears that Trump belongs to the establishment which benefits from the status quo. Why would anybody who is a ‘winner’ in the system want to change it?

First of all, the critics assume that members of the elite are only motivated by their personal financial interests. This, however, denies human nature. People have strong feelings on what is just and right. Elites have the means to become champions for others they sympathize with. END_OF_DOCUMENT_TOKEN_TO_BE_REPLACED