In spite of their titles and influence, they were dead wrong about Trump.

As if it wasn’t bad enough that Krugman didn’t believe in the possibility of a Trump presidency, he also predicted that stock markets would tank. Instead, stocks prices surged higher, meaning that Krugman had to eat crow with egg on his face.

Krugman had to eat crow with egg on his face.

Belgian professors, journalists, economists and a philosopher were equally confident that Trump would lose.

What the actual flying fuck? I went to sleep around yellow line, blissfully unaware & trusting this graph, not even bothering to stay awake. pic.twitter.com/5KGWOMowh3

All of these “experts” are what Nassim Taleb has dubbed Intellectuals Yet Idiots (IYIs). They use their (often overrated) expertise in one field to tell others what to do. And they rarely have friends without academic degrees.

Although I have had only three face-to-face talks with Americans in my entire life, I know America better than American IYI pundits like Krugman do. Thanks to the internet and thanks to my friends and family, some of which sympathized with Bernie Sanders, others with Clinton or Trump. 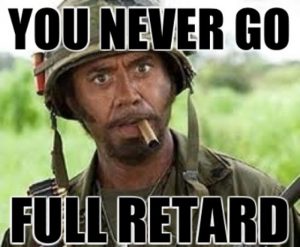 Living in a thought bubble is great, at least if you like confirmation bias. Everybody reassures you that you are right. You get really good at rationalizing your preferences. What would dumb outsiders know that we – the enlightened intellectual elites – don’t know? When someone points out you are wrong, you block them on Twitter. Or you simply ignore them.

I, on the other hand, am interested in reality instead of belonging to a club1. To make correct predictions, you don’t need to be super smart. Rather, you need to look for the correct inputs. Even if these are in conflict with your existing beliefs and preferences. Even when facts and ideas come from sources without traditional credentials.

Here’s an example. The header of my blog clearly states Money, power, and culture. Figuring out how the world really works. Soon after I launched my blog and created my Twitter account, I got an endorsement from a columnist because of something I wrote about helicopter money. This got me some followers on Twitter. But I also lost many of these followers when I retweeted this and commented on the ineffectiveness of the fight against terror.

It’s all fun and games as long as you write about financial technicalities (money), but don’t dare challenging their political groupthink (power and culture).

Had these people taken the trouble to read my blog posts on Trump, they would understand the democratic process much better. Instead, they are whining about the disaster that Trump will be, according to the movie in their heads.

When I pointed out that cartoonist/hypnotist Scott Adams had been a better political commentator than all the main stream experts, somebody thought I had taken psychedelic mushrooms.

Already in April, I wrote about how Scott Adams was explaining the genius of Trump. When I repeated after November 8th that the media should give credit to Adams, somebody on Twitter thought I was on psychedelic mushrooms:

This is a classic case of cognitive dissonance. How can a cartoonist be right? A hypnotist cannot be a credible political expert! Surely he must have been lucky? Hindsight bias!

On the night of the election, the pundits were bitch slapped by reality. They scrambled to make sense of what had just happened.

Some, like philosopher Maarten Boudry, discovered what I had already written in June: social justice warriors run amok contributed to the appeal of Trump.

Boudry told his followers that they should read people across the political spectrum. But he undermined that message by virtue signaling against “racists”. And he didn’t mention that you should be very suspicious if none of your friends in real life support Trump.

Do you follow tweeps across political spectrum? From @AnnCoulter & @jihadwatchRS all the way to @ggreenwald & @MMFlint. It's enlightening.

As long as a so-called rationalist like Boudry doesn’t acknowledge that ethnic differences have always been a factor in politics, he will never understand reality. It is disappointing that someone who wrote a book called “Advanced illusions”2 finds it impossible to get passed his own biases and prejudices.

If you read this post or follow me on Twitter, you probably are – or have the potential to be – a super forecaster. You are mostly immune to overconfident pundits like Krugman and his ilk of IYIs. See for yourself who gets things right. Don’t sever friendships with people who have a different opinion or social status. And never mix politics with your investments.

Update 22/11/2016: In a blog post written after this one, Krugman claims that Trump’s “administration will be the most corrupt in America [sic] history”. Furthermore, we learn from Krugman that Trump might be “destroying democracy in the next few months”. And that anyone who doesn’t take a stand against Trump “is betraying America, and mankind”.

Maybe famous Nobel Prize winners should not get hysterical.

Update 19/01/2017: Streetwise Professor comments on the anti-Trump elites at Davos, who are so deranged they praise the President of China for being pro globalization and against protectionism(!). Blog contains gems such as “Xi and the Chinese do things that Trump could only dream of in his greatest flights of mercantilist fantasy. To view Xi as the anti-Trump is utterly ridiculous, even by the clownish standards of the Davos dips.”, “But the “elite” is so obsessed with Trump and the havoc that they are just sure he will wreak on trade and the environment that they embrace the leader of a mercantilist environmental disaster as their savior.”, and “LGBTQXYZwhateveritisnowIcan’tkeepupandwillprobablyrunoutofletters”.