My book is published! 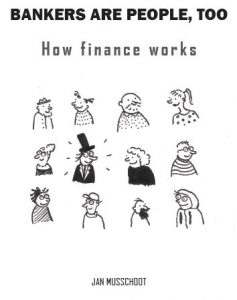 Do you think banking is too hard for you? Are you convinced that all bankers are crooks? Would you like to follow the financial news, but you always get stuck on terms like derivatives, cryptocurrency or quantitative easing?

Then I have some good news. END_OF_DOCUMENT_TOKEN_TO_BE_REPLACED

Should the European Central Bank (ECB) have an independent evaluation office (IEO)? Benjamin Braun recently asked this question on Twitter.

What do #centralbanking people think re independent evaluation offices? @bankofengland has one. Should @ecb have one?https://t.co/vxVsioaZ1r

My first reaction was: probably not, because the ECB already evaluates its past performance. However, after more thought, I have changed my mind. This post examines some recent failures of central banks; how an IEO could improve monetary policy going forward1; and what it would take for the IEO to be an effective department rather than a paper tiger. END_OF_DOCUMENT_TOKEN_TO_BE_REPLACED

Professor Christopher Balding has published a blog post with his views on the link between the China’s banking system and its currency: Can China Address Bank Problems without Having Currency Problems?

He believes that “it is much more likely that if there are systemic banking issues that currency problems will also arise.”

It is laudable that Prof. Balding summarizes his arguments. By being explicit about the assumptions, readers don’t just have to trust his opinion. Instead they can follow the logic and evaluate the strong and weaker points themselves.

The goal of this post is to counter some of the points listed by Balding to support his conclusion. END_OF_DOCUMENT_TOKEN_TO_BE_REPLACED

Transparency International EU has published a report about the European Central Bank (ECB). The author of the report, Dr. Benjamin Braun, has analyzed the independence, transparency, accountability and integrity of the ECB.

The launch of the report was accompanied by a symposium in Brussels on Tuesday. During an interesting panel discussion, it was debated how the ECB can improve the way it works. Carl Dolan and Leo Hoffmann-Axthelm from Transparency International EU stressed that the ECB had cooperated with the NGO.

Many topics were covered during the discussion. For example the status of whistleblowers, freedom of information requests, and the “cool-off period” demanded when ECB executives move to the private sector.

But my main interests were monetary policy and the ECB’s supervision of the banking sector. END_OF_DOCUMENT_TOKEN_TO_BE_REPLACED

Or to be more precise, debate about the financial institutional framework edition.

How should banks be regulated? Ten years ago, this question would have only interested a few specialists. Discussions about bank supervision and the role of the central bank were way too boring for the general public1. Besides, bankers surely knew what they were doing?

The global financial crisis and its aftermath changed this complacent attitude. The existing rules did not prevent the worse financial crisis since the 1930s. Governments had to bail out banks at a moment’s notice. Politicians took drastic decisions during the panic of September 2008. While those actions were taken with little democratic oversight, national leaders2 were the only agents willing and able to stop the collapse.

The crisis spurred a thorough update of bank regulation. Both in the United States and in Europe, legislation was passed to make banks safer. Avoiding a repetition of ad-hoc bailouts became a priority. The U.S. got its Dodd-Frank Act. The European Union (EU) set up the European Banking Authority (EBA) and worked towards a banking union3. America and Europe implemented capital and liquidity standards based on the Basel III recommendations. END_OF_DOCUMENT_TOKEN_TO_BE_REPLACED

David Beckworth recently interviewed1 (podcast) professor Jesús Fernández-Villaverde. Among other things, they discussed the hyperinflation in the Weimar Republic, i.e. Germany after World War I. The economists ponder why a hyperinflation that occurred in 1923 has had such a large impact on German economists and central bankers, even to this day. After all, the NSDAP rose to power in the 1933, at a time of mass unemployment and austerity. This was almost a decade after the hyperinflation ended.

The professors get to the hyperinflation at 8:20 into the conversation. Fernández-Villaverde tells the story of how inflation got out of hand when French and Belgian troops occupied the Ruhr2. The Weimar government encouraged workers to resist the military occupation. Strikers were paid with money freshly printed by the Reichsbank, the German central bank. The combination of no real economic production with an increasing amount of Papiermarks tanked the purchasing power of the currency. The hyperinflation began. END_OF_DOCUMENT_TOKEN_TO_BE_REPLACED

Central banks (CentBs) have drastically expanded their balance sheets in the wake of the global financial crisis. The Federal Reserve (Fed) and the European Central Bank (ECB) followed the example of the Bank of Japan (BOJ) by buying trillions of dollars and euros worth of long-term bonds, a policy known as quantitative easing (QE).

The CentBs make these purchases by “base money”, i.e. cash and reserves1. Neglecting legal restrictions, CentBs can create base money at will.

There is a lot of controversy among economists about QE and its consequences for the balance sheets of central banks.

This post discusses the question of whether or not base money should be considered a liability of the central bank. After that issue is understood, we can clarify when the CentB can book a profit and how this affects government finances.

One of the stated goals of QE is to raise inflation. Some worry that once this happens, rising interest rates will cause massive losses to the central bank, resulting in unspecified “bad things”. I argue that these fears are unjustified. END_OF_DOCUMENT_TOKEN_TO_BE_REPLACED