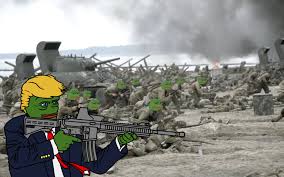 The online support for Trump is part of a long culture war in the West.

SJWs have their own politically correct (PC) language, demanding safe spaces and trigger warnings to be shielded from topics which may discomfort them at colleges. SJWs have defined a bewildering number of gender identities beyond the traditional male/female. They see the world through the lens of the patriarchy and colonialism…

This SJW culture has been opposed by a number of people, including British speaker Milo Yiannopoulos and American authors Ben Shapiro and Vox Day.

Gamergate was one notable case of pushback against SJW culture. Internet trolls fought against what they perceived as excessive demands for feminism and diversity.

The candidacy of Donald Trump was quickly supported by largely the same demographic involved in Gamergate: young, white men tired of political correctness.

These are students who spend a lot of time on message boards where they can anonymously share ideas. The online hubs of Trump support were the politically incorrect /pol/ discussion board of 4chan, and the Reddit board dedicated to The Donald.

From these boards, memes spread across the internet. Memes are ideas, often in the form of pictures with some text.

Everybody with basic Photoshop or video editing skills and some time at their hands can make memes. And thanks to social media, these memes can reach a very large audience.

The young men who supported Trump made him into their God Emperor, a larger than life figure, as shown in some of the pictures below.

Others edited Trump’s face and speeches on fragments of popular movies and series, including Game of Thrones, Batman, Gladiator, Mad Max and 300:

Trump even shared a tribute video made by a young fan with his millions of followers on Twitter:

At this point, you might think that this is all pretty nerdish stuff. You would not be wrong. Trump trolls joke about themselves that they are autistic NEETs in a world of normies.

Most of the talk about right wing death squads (RWDS) and throwing liberals out of helicopters – as Pinochet did in Chile – comes from teens and twenty-somethings without political power.

However, their politically incorrect or shocking images (see below) can reach a huge audience.

Twitter is a perfect environment for sharing memes. Users can have anonymous accounts, and interact with famous people with hundreds of thousands of followers. The platform is frequently used by journalists and pundits to spread their ideas and for finding news. These properties make Twitter the ideal battlefield for the trolls for Trump.

Although the shitposters are a very small minority of internet users, their presence has annoyed columnists like Noah Smith and politicians like Hillary Clinton. By complaining, the victims violate one of the first rules of the internet: Don’t feed the troll. Feedback encourages trolls to come back for more.

Nobel prize winning economist Paul Krugman, who has over two million Twitter followers, posted this tweet days before the election:

Given the Trump campaign's closing argument, I'm tempted to replace my avatar: pic.twitter.com/qTzbo4BLRO

However, the official Trump campaign has never made any antisemitic remarks. The reaction of Krugman is undoubtedly due to the trolling he received on Twitter. See the replies to Krugman’s tweet for some examples of trolls.

The disproportionate effect of a limited number of trolls have on their enemies is the best they could hope for. They have succeeded beyond their wildest dreams by memeing Trump into the White House.

Campaign against the cucks

Although anonymous accounts targeted every opponent of Trump, special attention was devoted to conservative Republicans who didn’t back Trump.

These conservatives were dubbed cuckservatives or cucks for short. This insult refers to cuckolds. The trolls mocked the old style conservatives as impotent because they always yield to liberal demands. Conservative cucks were said to be married to wives who had (black) boyfriends, or laughed at as men who raise another man’s child.

Being against SJWs was not enough to be spared the cuck label. Ben Shapiro, a vocal Never Trump Republican, had to take a lot of online abuse.

Conservative writer Bill Kristol was harrassed for not supporting Trump, as was journalist Glenn Beck.

Another cuck who got trolled hard was David French, a writer for the conservative magazine National Review. Because French considered running against Trump as a third party candidate, he suffered from alt right accounts. French was the ideal target for the internet bullies. To them, this was a case of meme magic becoming real. An actual cuck –  French and his wife had adopted an black African girl – was running against their hero Trump!

Evan McMullin was a another conservative who tried to deny Trump the White House by running as an independent candidate. He was quickly ridiculed as ‘Egg McMuffin’. He was branded a typical warmongering neoconservative, having worked for the CIA.

Confronting journalists online might get under their skin, but it doesn’t have much effect on the election outcome.

To discourage people from voting for Hillary Clinton, a barrage of hashtags and (dis)information campaigns were launched on social media.

A recurring theme was that Clinton had health problems. The sick Hillary conspiracy was confirmed when she fainted at a 9/11 memorial.

The feminism of Hillary was translated into #DraftOurDaughters images. Using the layout the Clinton propaganda, the idea was spread that women would be drafted into the military to fight and die at the frontline of Hillary’s wars. Some women voters were put off by this idea.

Superstitious voters were repelled from Clinton by #SpiritCooking. Based on the Podesta emails released by Wikileaks, Clinton was linked to satanic rituals.

A sneaky way to prevent people from voting Clinton was the hoax that you could vote by sending a text message. 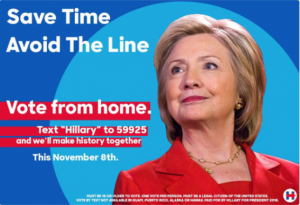 The examples above shouldn’t give the impression that all online actions were against Clinton. There were also efforts to get Trump supporters to the polls. For example in Pennsylvania, volunteers organized lifts to conservative Amish, a demographic which doesn’t usually vote. Trump narrowly won the crucial battleground state of Pennsylvania.

Twitter users can report accounts that they perceive as harassing. Milo Yiannopoulos (@nero) was one of the first high profile Trump supporters to be permanently banned from the platform.

These suspensions are not only dubious behavior by Twitter (what about free speech, double standards…), they also erase contemporary history.

Of course, new accounts can be set up very quickly. One user who respawns time and again goes by the name of FinMin2 (previously FinMin Taylor Swift). Ricky Vaughn made several new accounts after his original account was banished. 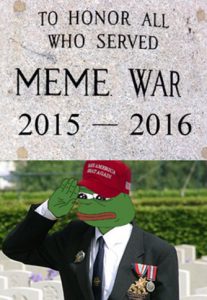 A battle won, the war goes on

There are no medals for the anonymous fighters who memed Trump into the White house.

Fittingly, some of the digital wizards have made a video to commemorate their contribution.

But that doesn’t mean the NEETs were not noticed by Team Trump. Katrina Pierson, the national spokeswoman of the Trump campaign, acknowledged the online support in this tweet:

A special thanks to all of my friends, supporters and fans @reddit ? #DigitalNinjas I ❤️ you! #Reddit @4chan too! #4Chan #MAGA

Some of the digital ninjas replied to her tweet.

After it was clear that Trump really would become the next president of the United States, his supporters couldn’t stop gloating.

But the fight against political correctness doesn’t end with Trump in the White House. His victory will only embolden people to shift the Overton window to the right. As I said in the beginning, the West is in a long cultural war…

Addendum: as the faces of Trumps anonymous supporters will remain unknown, here is a list of variations on Pepe the Frog, the most ubiquitous cartoon for Trump.

Journalist Kurt Eichenwald was “assaulted” by Twitter user @jew_goldstein. The troll posted a flashing GIF image as a reply to Eichenwald (who has epilepsy). This was the response from Eichenwald’s account: 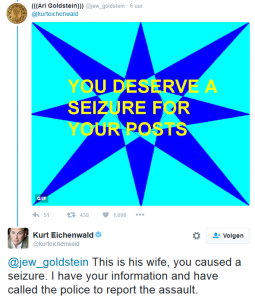 Obviously, the trolls went wild after this success. For example, the wikipedia entry for Eichenwald was modified, claiming he had died:

Politico has published a long article on the same subject: World War Meme. Note that my blog post was written more than three months earlier 😛