Should the European Central Bank (ECB) have an independent evaluation office (IEO)? Benjamin Braun recently asked this question on Twitter.

What do #centralbanking people think re independent evaluation offices? @bankofengland has one. Should @ecb have one?https://t.co/vxVsioaZ1r

My first reaction was: probably not, because the ECB already evaluates its past performance. However, after more thought, I have changed my mind. This post examines some recent failures of central banks; how an IEO could improve monetary policy going forward1; and what it would take for the IEO to be an effective department rather than a paper tiger.

Before I discuss the desirability of an IEO, a quick reminder of what institutions like the ECB do. Central banks have one or multiple mandates. Typically, the task of the central bank is to guarantee price stability2. In addition to its inflation goal, the central bank should enable economic growth and keep unemployment in check.

The central bank is supposed to fulfill those mandates by adjusting its monetary policy3.

And that has been a problem during the last decade. Central banks have frequently made forecasts that turned out to incorrect. Their predictions were systematically too optimistic.

Inflation in the euro area remained stubbornly below the ECB’s forecasts (source): 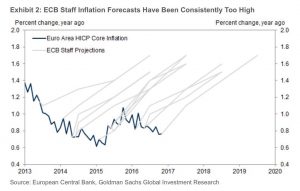 The troika (i.e. the IMF, the ECB and the European Commission) vastly underestimated the collapse of Greek GDP (source, via Zerohedge): 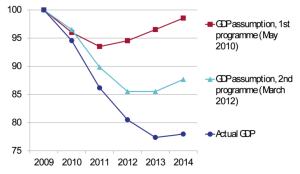 Wages grew more slowly than the ECB predicted they would (source):

To be clear, overly optimistic forecasts aren’t just an issue for the ECB. The Federal Reserve, the central banking system of the US, has had similar issues. 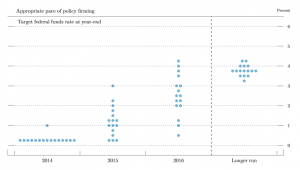 The failure of central banks to satisfy their mandates has produced several problems. Most importantly, millions of workers suffered from un(der)employment while trillions of dollars’ worth of potential GDP was not realized. Secondly, central bankers have demonstrated that they do not control economic variables as well as they would like to. Third, the repeated failure of their forecasts has discredited economic experts5.

This last point – the perception that central bankers (and economists in general) are untrustworthy – is not limited to conspiracy theory websites.

Professor Tim Duy on the Fed:

The Federal Reserve is not a cabal of evil geniuses dedicated to bringing down the global order so as to create a new one with its Wall Street masters in complete control. They are instead a clown-show, a remedial class of halfwits and empty suits opining on topics they would in a just society be banished from entirely. – Jeffrey Snider (source, via Rudy Havenstein)

There is no longer any excuse for making the same mistake [i.e. confusing math with science, rationality with reality] with economic theory. For more than a century, the public has been warned, and the way forward is clear. It’s time to stop wasting our money and recognise the high priests for what they really are: gifted social scientists who excel at producing mathematical explanations of economies, but who fail, like astrologers before them, at prophecy.

These criticisms could be avoided if central banks were better at their jobs. A number of organizations have already established an independent evaluation office to improve their performance.

The International Monetary Fund (IMF) has had an IEO since 2001. The Bank of England (BoE) established its IEO in 2014.

So how could an IEO at the ECB (or the Fed) help to improve monetary policy? How can a central bank learn from its past performance and produce better forecasts?

An obvious starting point would be to identify how past projections were made. Staffers at the IEO should interview those responsible for past forecasts.

If policy makers used formal, numerical models, the assumptions behind those models should be scrutinized.
If the forecasts were based on the intuition of economists, investigators at the IEO should check for biases. One critique is that the generation of economists responsible for monetary policy today lived through the  inflation of the 1970s. It’s not unreasonable to assume that their personal experience leads them to overestimate the likelihood of rising prices and wages.

But here’s the thing: external input doesn’t guarantee a better performance, when the external experts use the same flawed models as central bank economists. In that case, the IEO will only waste money by paying consultant fees to like-minded analysts. Nothing will be learned.

A 2010 survey is a striking example of such groupthink. CNN asked 25 leading economists when the Federal Reserve would raise the federal funds rate. One answered 2013, the others believed that the Fed would hike rates in 2011 or 2012. In reality, the Fed would wait until December 2015 until it raised its benchmark rate for the first time after the Global Financial Crisis.

So the IEO should actively search for external analysts who made correct predictions and look what – if anything – it can learn from them. Maybe the contrarians were just lucky, in which case they can be ignored. But some external economists can undoubtedly share valuable insights.

Finally, even if the IEO is able to identify what went wrong in the past, that doesn’t guarantee the performance of the central bank will be better in the future. As long as the recommendations of the IEO are not translated into better monetary policy, nothing will change. Think of the IEO as the satellite navigation system in a car. Even if the satnav is right, it’s useless if the driver (policy makers) ignores its directions.

In conclusion: yes, central banks should have an IEO. At the same time, they need a framework to make sure (a) that the IEO actively challenges the assumptions informing monetary policy and (b) that the recommendations of the IEO are implemented.

Check out Bankers are people, too if you want to know more about central banking!