Everybody has heard of bitcoin by now. The price of the cryptocurrency is hitting all-time highs. John McAfee has bet that one bitcoin will be worth $500,000 in the year 2020. Bank chief Jamie Dimon called bitcoin a fraud. His statements were (predictably) followed by articles saying that bankers should be afraid of cryptocurrencies.

It seems there are two bitcoin camps: the true believers and the naysayers. Izabella Kaminska from FT Alphaville in particular has been explaining for years why cryptocurrencies are not the utopia some imagine them to be. In this post, I summarize my own reasons why I don’t think bitcoin is a credible threat to the banking industry.1

Bitcoin enthusiasts have a simple story to convince people of bitcoin’s advantages. Suppose you’re on holiday and you run out of money. You call a friend to send you some more. A bank wire transfer takes a couple of days. Banks charge substantial fees for wire transfers. Bitcoin on the other hand is presented as a quick, cheap, and safe way to transfer money.

In practice, Bitcoin transfers can be quite expensive. A cost of more than $2 for a transaction is no exception, which makes the currency useless for small purchases. In addition, it can take a while until bitcoin transactions are confirmed.

But let’s assume for the sake of the argument that bitcoin payments are indeed cheap and fast. Would you use them? I’d argue most people won’t, for the same reason Windows is more popular than Linux. Most of us are willing to pay for convenience.

Unlike geeks who love to experiment with technology, normal people just want an easy and intuitive user experience. And a contact person to help them when something goes wrong. When you lose your debit card, the bank teller will get you a new one. If you lose the private key to your bitcoin address, nobody can help you – by design! Imagine losing your savings or an inheritance this way…

Besides, are bank services really as awful as some bitcoin fans claim they are? The last time I bought a plane ticket, I could scan a QR code with my smartphone. This took me to a secure page of my bank. I confirmed the payment by typing my PIN code on my phone. No need to search for my credit card. The whole process took 30 seconds.

Many bank transfers aren’t expensive either. Wiring money from my (Belgian) bank account to any account at the same bank is free and instantaneous. I can pay friends or in shops with my smartphone for a flat fee of €0.06 per payment. 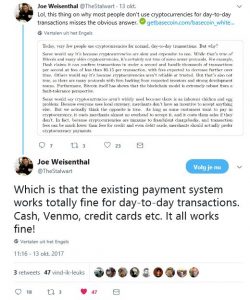 Commuting in a Formula 1 car

A quick transfer of funds sounds nice. But how relevant are quick wire transfers in real life? Businesses often have to wait 20 to 30 days until their invoices are paid. The bottleneck is not the bank, but the willingness of the client to pay on time and the efficiency of his administration.

Think about it this way. Commuters wouldn’t arrive meaningfully faster at work if everybody drove a Formula 1 car. They would still lose time at traffic lights and because of traffic jams and road works. Increasing the top speed of cars is optimizing a small subset of the total problem. Similarly, fast cryptocurrencies like bitcoin won’t solve the problem of late payments.

Ironically, the businesses that have the most to gain from immediate payment systems are the banks themselves.

Money has a lot in common with language. Both social constructs need a network of users to be useful.

Proponents often base their support for bitcoin on philosophical grounds. Cryptocurrencies are not dependent on the powers that be, i.e. central banks backed by states. Similar internationalist ideals motivated earlier generations to embrace constructed languages such as Esperanto.

The more paranoid bitcoin fans will undoubtedly see parallels between the crackdown on cryptocurrencies and the persecution of Esperantists during Stalin’s Great Purge and in Nazi Germany.

Bitcoins out of thin air

As mentioned before, bitcoin enthusiasts are often suspicious of the money creating powers of central banks. They like to point out that the supply of bitcoins is limited to 21 million.

But they tend to overlook that we don’t just pay with money that we have previously earned. Households, governments and businesses go into debt to buy things now. As soon as banks start taking bitcoin deposits and making loans in bitcoin, they can create bitcoin ‘out of thin air’.

Bitcoin banks will be like regular banks, but worse. There is no central bank that can create base money in the event of a bank run. When people lose their deposits, they will demand more regulation of cryptocurrency banks. History repeats itself…

These are my main issues with bitcoin. Evidently there are many more, such as bitcoin’s volatility relative to the dollar (bad for commerce) and the fact that cash beats electronic currencies (centralized or decentralized) when the power is down. Activists have criticized (central) banks for enabling carbon emissions. Bitcoin surely won’t stop climate change, as bitcoin miners consume a lot of energy.

I briefly discuss cryptocurrencies in Part VII (‘The future of finance’) of my book Bankers are people, too.