This is a review of a book written over 50 years ago by a central banker.

Based on that introduction, even most finance geeks will probably think “boring!” or “irrelevant!”. Until you learn it has Nazis, hyperinflation and the Nuremberg trials in it. And those are not even the interesting parts.

Hjalmar Schacht (1877-1970) wrote The Magic of Money near the end of his long life. The book offers a unique, German, first-hand perspective of international finance and politics between 1900 and 1965. 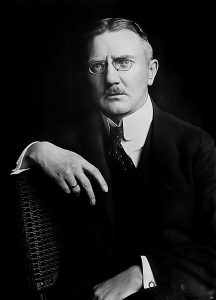 I enjoyed The Magic of Money not just for the history, but mostly because it contains some observations that remain as true today as when they were written half a century ago. In the words of Schacht himself:

“It is not a text-book but a book of experiences. For the best school is not in the classroom, but in life itself. But the fact that it deals with an interesting chapter in economic history is not the only justification for this book. For it will be shown that the problems which were encountered in the period between 1920 and 1940 are not unique phenomena. They recur from time to time in this or similar form.”

As a kid, Hjalmar Schacht hadn’t dreamt of becoming a banker. He was fascinated by literature, languages and history. Schacht enrolled at university as a medical student, but he quickly switched to German philology. Thanks to lectures of Lujo Brentano, he began studying political economy.

After graduating, young Hjalmar started working for the Bank of Dresden. But not as a banker. Schacht was one of the first to write newsletters about important economic events of the day.

Schacht’s talents were recognized by the bank’s management. In 1905, he joined his manager on a business trip to the U.S. (on the same ship as the tenor Enrico Caruso). The two Germans met with banking tycoon John Pierpont Morgan in New York.

“For a whole week I was able to participate in the discussions which were dominated by Morgan’s superb intellect. In those days the firm still occupied the old low corner building in Wall Street which has now been replaced by a modern skyscraper. The executive office, situated on the ground floor, was separated from the remaining offices by shoulder-high glass walls. […] Everyone had access to the chief’s desk, provided only that he was free; the glass screens permitted everyone to see if this was the case. Relations between chief and employees were friendly and informal without respect suffering.”

Schacht got his first public sector assignment during the First World War. He did “some banking tasks of an administrative nature” in occupied Belgium. However…

“I had not learnt the soldier’s first commandment, which was that one should at no time and in no place ever draw attention to oneself. I drew attention to myself through a number of unusual ideas which brought me nothing but trouble, and resulted in my being sent back home in July, 1915.”

The next phase of Hjalmar Schacht’s career is what is best known among financial history buffs. Schacht served as president of the German central bank (Reichsbank) twice: from 1923 to 1930 and from 1933 to 1939. He was also Hitler’s Minister of Economics between 1934 and 1937.

In The Magic of Money, Schacht explains the financial troubles of Germany during the interbellum. It was the time of the Weimar hyperinflation, the Dawes and Young plans for the German reparations, the MEFO bills that financed the economic recovery in the 1930s, and Schacht’s system of bilateral trade with exporters of raw materials. A detailed explanation is beyond the scope of this review.

Looking back at the National Socialist period, Schacht stresses the fact that Germany was not adequately prepared to wage a world war. Those in charge of military affairs exhibited delusional thinking, as the following anecdote illustrates:

“One evening I met Admiral Raeder at a theatre. ‘You look so happy, Admiral, what is it?
‘Well, Schacht, I have good reason to be cheerful, the Führer has just granted me 6o milliard [i.e. billion] marks for the development of the navy, 6 milliards per year for the next ten years.’
‘That really is something out of the ordinary, Raeder. May I make so bold as to remind you that in 1932 under the chancellorship of Brüning the entire income of the Reich amounted to no more than 7 milliards. You, however, will get almost as much for the navy alone. Where do you think all this money is coming from?‘
‘Well, of course, that is something which my successors will have to worry about.’
I was more than somewhat perplexed by this reply. I had not anticipated such abysmal lack of knowledge, and such frivolity in the high command of one of the three arms of the Wehrmacht.”

Near the end of the Second World War, Schacht was arrested by the Gestapo. Nevertheless, he was tried at Nuremberg because of  his earlier connections to the Nazi regime. At several places in the book (which is not cronological), Hjalmar Schacht stresses that he was acquitted.

After the war, Schacht became an advisor to developing countries. He was called to Iran by Mossadegh (“one of the most capable men I have ever met”). He also advised leaders in India, Vietnam, Egypt, Argentina and Indonesia. But he regretfully comments that in most countries

[…] purely political considerations overshadowed all economic interests. […] Everywhere my recommendations were approved in theory, but no one could be persuaded to put them into practice.

The fate of a consultant!

Personal views and lessons for today

Throughtout the book, Hjalmar Schacht gives his opinions on a range of topics.

“[M]onetary policy is an art. Art and systems contradict each other.”

“We must get away from the idea that our economic problems can be solved by means of theories, rules and formulae. Certainly scientific considerations can be helpful, particularly if they are based on experience. But economic life is so diverse, so changeable, that even the most brilliant prescription is bound to come up against events which it did not foresee.”

“National Socialist agitators led by Gottfried Feder had carried on a vicious campaign against private banking and against our entire currency system. Nationalisation of banks, abolition of bondage to interest payments, and introduction of state Giro ‘Feder’ money, these were the high-sounding phrases of a pressure group which aimed at the overthrow of our money and banking system. To keep this nonsense in check the president of the Reichsbank called a bankers’ council which made suggestions for tighter supervision and control over the banks. […]
In the course of several discussions, I succeeded in dissuading Hitler from putting into practice the most foolish and dangerous of the ideas on banking and currency harboured by his party colleagues.

On what really ended the hyperinflation in 1924:

“It was not the Rentenmark, but the subsequent rigid credit restrictions, that made the new Reichsmark currency “stable”.” – Gustav Brecht

On the limitations of stimulus financed by central bank credit:

“The MEFO bill system was not and could not be a perpetuum mobile. As soon as full employment had been reached every further granting of credit could only lead to an excess in the circulation of money, and to a rise in the price level, and thus to inflation. This had to be avoided at all costs.”

On the problems in the euro zone and central bank independence (note that The Magic of Money was written in the 1960s!):

“Even if common currency is regarded and desired as the crowning achievement of the European Common Market, it would be wrong to leave the relationship between the government and the central bank out of account.”

“The closer the economic ties between various countries, the easier will it become to reach agreement on currency policies. Whether these will ultimately lead to a unitary currency will always depend on the extent to which the participants are prepared to surrender their sovereignty.”

“Against my advice the government decided to indemnify all creditors of the Danat bank. I emphatically represented the view that only the small depositors should be protected by a state guarantee.”

“The manner in which the bank crash of 1931 was handled by the vested interests and the government of the Reich made a large contribution to the discrediting of the private capitalistic economy.”

The little man abhors inflations not only because it makes saving very difficult or impossible, but above all because it makes the rich richer and the poor poorer. Inflation upsets the social structure. Owners of material goods gain, savers of money lose.

Although The Magic of Money is a hodgepodge of ideas, I really enjoyed reading it. Unfortunately, I can’t say the same about books by more recent central bankers (Greenspan’s book is super boring and way too long).

If you want to understand the basics of money and banking before you read The Magic of Money, check out Bankers are people, too: How finance works

3 thoughts on “The Magic of Money”