I frowned the first time somebody introduced me as an ‘economist’. After all, I don’t have a piece of paper that says I’m an economist. But upon reflection I realized that it was true. In effect, I had indeed become an economist. How did that happen?

My favorite subjects in school were history and science. Then I studied physics at university. During all that time, I never took a single class of economics. It just didn’t interest me. Frankly, my opinion of economists could best be described by this meme: 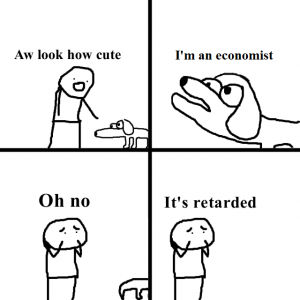 But that was before 2008. While I was doing my PhD, oil and food prices were suddenly all over the news. I started reading about peak oil. In the fall of 2008, the American and European banking systems needed to be bailed out. Stock markets crashed.

The banking crisis got me hooked on economics.

I spent several hours a day reading the following people/sites (among others):

As you can see, it’s quite an eclectic mix of economists and market observers, predominantly American ones.

After graduation, I left science to work in a bank. Although I did mostly technical work, it did teach me a lot about real life in the financial industry.

I also kept on reading. And I grew increasingly annoyed by the quality of economic news coverage. No, banks don’t lend out savings. Yes, you can solve a debt crisis with more debt. No, quantitative easing is not “monetary heroin” – what does that even mean? No, banks will not be replaced by blockchain… 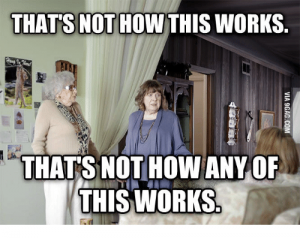 Even economists who should know better kept on spouting nonsense.

That’s why I decided to summarize what I had learned about money and banking since 2008. I quit my job to write Bankers are people, too. You be the judge of how well I did.

Economists with an actual degree in economics probably want to know if I still think they are retarded. Allow me to answer like an economist.

On the one hand, I have read and met some very good, nuanced economists. This is the hard-working majority who are almost never asked for comments by journalists. On the other hand, the media sure loves ideological hacks who keep on repeating their stale discarded theories.

I think this overlap may have more to it than Paul Krugman realizes pic.twitter.com/hjJfmWNBPU